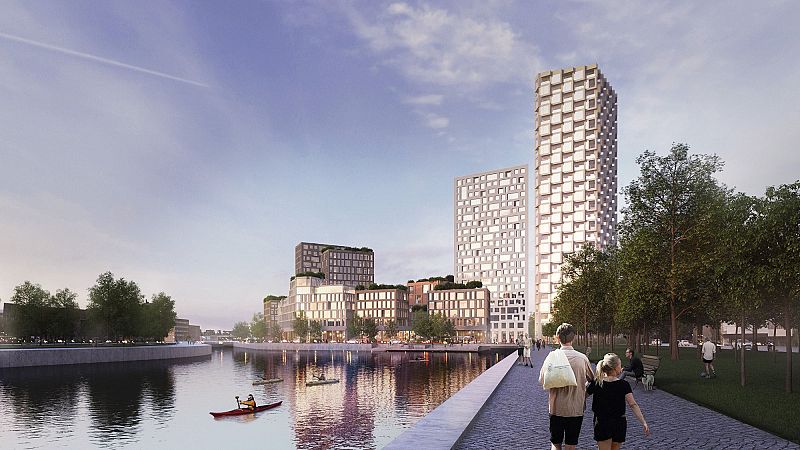 BPI (Groupe CFE) organized an event on the 14th of December 2017 to present its Key West project to selected guests.

On the program, for the first block soon developed by BPI (in partnership with Land Invest Group) as part of the urban development plan in Anderlecht "Biestebroeck" : 47,000 m² of housing, and 16,000 m² of offices, shops, restaurants and shops. "Architects A2RC (B) and Henning Larsen (Dk) drew the design of the project, we are launching the studies on the basis of the PPAS finally delivered, and we hope to file the permit applications after the summer of 2018." says Jacques Lefèvre, CEO of BPI.

The urban development plan in Anderlecht, as part of the Canal plan, is the largest in the Brussels Region. On the program: a new mixed neighborhood combining productive and residential activities.

The Government of the Brussels-Capital Region approved last Thursday the PPAS "Biestebroeck". This particular development plan, which organizes the urbanization of the huge urban area to be densified between the Boulevard Industriel and the canal in the Anderlecht area, is the largest for the moment on the perimeter of the 19 municipalities.

It will undoubtedly be the locomotive of the Canal Plan initiated by the Government of Brussels to recreate an urban connection around the canal while preserving economic activity. The ambition of this PPAS is to revitalize and requalify the entire urban perimeter to create a new mixed neighborhood combining productive and residential activities, while connecting the two banks of the canal and transforming it into a hub of economic activities and logistics of proximity.

"In concrete terms, this PPAS will enable the development of 370,000 m² of housing, 30,000 m² of equipment, 30 to 40,000 m² of productive activities, 15 to 30,000 m² of retail space and quality green spaces. Schools are also planned as well as about 3,700 housing units to meet the population growth in our Region. In the long term, there will be approximately 10,000 new inhabitants in this area and I am delighted," says Minister-President Rudi Vervoort.